Benefits of an At-Home Test for Sleep Apnea 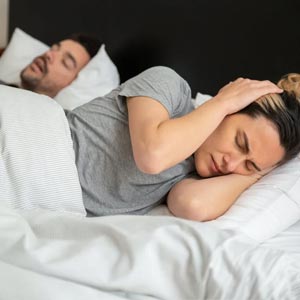 Sleep apnea is a serious condition that affects millions of people in the US. If you (or your doctor) think you may have sleep apnea, an at-home test may be the best way to find out. Before we discuss the process of testing for sleep apnea, let’s take a moment to examine what sleep apnea is and why it may be causing you trouble.

What are Sleep Apnea and Its Types?

Sleep apnea is a condition in which you stop breathing in your sleep. The stoppage is generally short-lived, and your body will jolt you awake and force you to breathe, but even so, the condition can cause major health problems.

There are several major types of sleep apnea. The Mayo Clinic defines the three main types:

Since obstructive sleep apnea is the most common type, we’ll focus on it instead of the others.

With obstructive sleep apnea, the tissues in your mouth and throat relax during sleep and block your airway. As airflow stops, the oxygen level in your blood drops, causing your brain to kick start the breathing process, which is accompanied by gasping or choking.

Sleep apnea, with the constant jolts awake, can lead to chronic health conditions. It can even be fatal if the case is severe and left untreated. Research shows that, if left untreated, sleep apnea patients may lose 20-50% of their lifespan.

What are the symptoms of sleep apnea?

If you are experiencing one or more of these conditions, it’s a good idea to talk to your doctor about them today!

According to Healthline, untreated obstructive sleep apnea “can cause serious health problems such as:

Proper diagnosis and treatment are essential for preventing complications.

How do you test for sleep apnea?

Like any diagnosis, getting sleep apnea diagnosed starts with your doctor (or a specially trained dentist). They will begin with an assessment of your medical history and do a physical examination, focusing primarily on your head, neck, and mouth. The doctor will need to know all about your symptoms, and will likely guide you through a series of diagnostic questions.

If the doctor is concerned that you may have sleep apnea, they will order some testing. In particular, they will want to perform (or send you for) a “polysomnography.” The Mayo Clinic explains the process: “During this test, you're hooked up to equipment that monitors your heart, lung and brain activity, breathing patterns, arm and leg movements, and blood oxygen levels while you sleep.”

For the most accurate and full version of this test, the polysomnography will be performed in a hospital or in a medical facility called a sleep center.

There are some disadvantages to testing for sleep apnea in a sleep center, however, so doctors have developed a simplified version of the polysomnography that can be performed at home.

Benefits of an at-home test for sleep apnea

According to Johns Hopkins, A home sleep apnea test is a very simplified breathing monitor that tracks your breathing, oxygen levels, and breathing effort while worn. It does not fully capture what is monitored with an overnight sleep study. Overnight sleep studies give a more thorough assessment of sleep issues. They are attended by a sleep technologist and capture many more signals, including brainwaves for sleep, muscle tone, and leg movements. For individuals with certain heart, breathing, or neuromuscular problems, an overnight sleep study at a sleep center may be better.

On the other hand, if you are a candidate for a home sleep apnea test, they may be beneficial for several reasons.

One of the challenges of a sleep study in a sleep center is that it’s often hard to sleep in an unusual environment. Without deep and natural sleep, your sleep apnea symptoms may present themselves. As Johns Hopkins puts it, “with an at-home study, you’ll be in the comfort of your own surroundings, which could offer a more accurate reading of how you actually sleep.”

Additionally, Johns Hopkins explains, an at-home sleep apnea test is less expensive than a full sleep study: “It’s usually a third to a fifth of the cost of doing an in-lab study, and it’s typically covered by insurance.”

If you are experiencing sleep apnea symptoms, don’t delay– make an appointment to see our specialists at TMJ & Sleep Therapy Centre of Raleigh-Durham today!